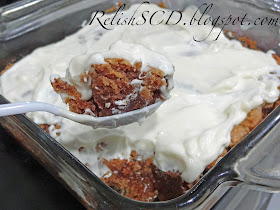 Best. Thing. Ever.
This adaptation from the Urban Poser came about simply because I am cheap and slightly lazy in the kitchen. Parchment paper is expensive, and when you work with almond flour the consistency is completely different than wheat flour, it's really not workable at all. Therefore rolling the dough out just didn't appeal to me. I can mix simple cake batters and pour it into pans all day long just to pop it in the oven and -boom- finished product. But to have to roll, and then mix separately, and then spread out on parchment paper, and then roll again, and then cut, and then place, and then finally bake- I've done that before and I honestly didn't like it. So, me, wanting all of the flavor and none of the work decided to put my own spin on cinnamon rolls. Instead of rolling the dough up and slicing into individual servings this is more of a cinnamon roll cake of sorts. Wow, did it deliver! The top was perfectly brown and the inside was gooey and soft. Perfect for the Paleo sweet tooth.

Healthy dousing of cinnamon (I'd say about 4 Tbsp but I don't measure)
Healthy drizzle of honey (again, I don't measure but enough to cover across the pan in a thin stream
1/3 cup raisins

2:1 ratio of Greek-strained yogurt to honey (1/4 cup each, try, & make sure yogurt is dripped for at least 12 hours)
*For dairy-free/Paleo use 2:1 ratio of coconut cream concentrate (aka coconut butter) to honey. 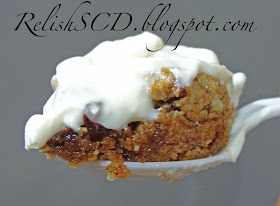 Mix all the roll ingredients together in a bowl.
Spoon 1/2 of the batter into baking dish, I used a 9 x 9 glass dish.
Then using the cinnamon you have for the filling, generously coat the entire batter over the top with a thin blanket of spice. (FYI my cinnamon is not very strong, I am pretty sure I have to use about 5 times the normal person to get the same flavor out of it, if you have good, strong tasting cinnamon I would say to just dash the top of the filling in the pan instead of blanketing it.)
Then drizzle honey all over the cinnamon, it will probably bead up like water hitting oil but that's ok, just make your way around the pan anyway.
Drop raisins across the top of the mixture.
Then add the rest of the batter on top, trying to evenly spread it so that it bakes evenly.
Place in the oven at 350 degrees for 10 to 15 minutes.
PLEASE watch this carefully, as soon as the top gets to browning, it's done.
Way better to have this undercooked than over, as it will turn into a hard, nasty brick.
Let cool.

Mix honey and yogurt together, spread on top of cooled roll-cake. EAT.

By the way, this is my 100th post! Yay! I honestly was not sure what would become of this blog when I started it last year, but thanks to all my regular readers & Vitamix shoppers, I can say it is a success! THANK YOU! (yes, you!)